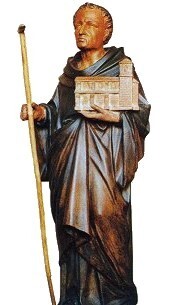 St. Robert of The House of God

Robert de Turlande was born in the year 1000 in Aurillac, Auvergne, France. After a blameless life as a youth, St. Robert was ordained to the priesthood and became a canon of the church of St. Julian. St. Robert distinguished himself with fervent charity to the sick and poor and with his zeal for the public worship of God. He is said to have built and restored no less than fifty churches during his lifetime.

In 1046, with the permission of Pope Benedict IX, St. Robert and two companions built a hermitage and embarked on a life of prayer and total commitment to the poor.

Within three years so many disciples had joined the holy hermits it became necessary to build a monastery. With donations from the pious people, the buildings arose and developed into the great abbey of Chaise Dieu (Casa Dei). St. Robert was the Abbott and gave the community of 300 monks the Benedictine rule. Chaise Dieu became the mother-house of several other Benedictine monasteries and one of the most flourishing in Christendom.

Although much of Chaise Dieu was plundered during the religious wars and the French Revolution, there still remains the vast church and cloister. It is also the tomb of Pope Clement VI who began his spiritual life as a monk at Chaise Dieu.